Well, today a long-standing mystery (to me, anyway) was finally solved...

Way back in 1982, Walt Disney World in Florida consisted of exactly three places: Disney World, EPCOT, and the Lake Buena Vista Shopping Village.  The last area was open access (and still is; although it is now a massive entertainment complex taking in probably 400% more space), and would often host events during holidays that you didn't have to pay to get into the parks to see.  It was also a great place to watch the fireworks at The Magic Kingdom from.

It remained that way, with little change, until Pleasure Island opened in the early 1990s and has continued to expand; now you can walk to most of the Disney resorts and take transportation to and from the parks from there.

However, back in '82 it was as it appears above.  Located pretty close to the center was a well-appointed toy shop.  I bought a few Lego sets there when I was a kid, but I had a hazy memory of actual D&D products being for sale there.  I forgot about it, or rather, put it on the back-burner, for many years.  I did ask Gary Gygax about it in the early 2000s, but he wasn't entirely sure if TSR had had a distribution deal with Walt Disney Enterprises and directed me to ask some of the other former TSR employees.  Nobody else seemed to know, either.  So for the time being it remained a mystery. 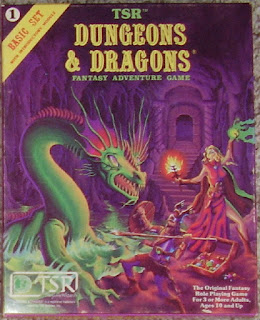 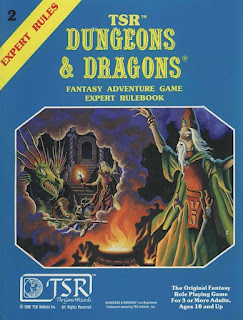 The topic would sometimes come up and I couldn't find a single shred of evidence that Disney had, indeed, sold D&D at any of their parks.  It would make sense if they didn't, given how embroiled in controversy D&D seemed to be to many people.  However, on the flip-side, I distinctly recall, up until the late 1990s, seeing West End Games' lamented Star Wars RPG, along with boxes of Grenadier miniatures for same, at the "Tatooine Traders" gift shop at Disney Studios.  Also, while not strictly an RPG product, for a while you could buy Grenadier miniatures of Disney characters! 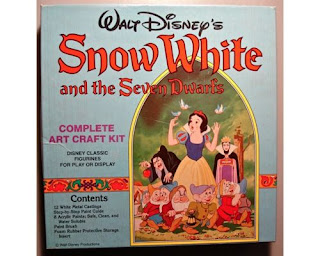 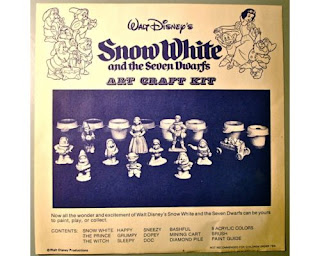 But none of this definitively answered whether or not I was remembering correctly.  And it struck me: the answer (or possible answer) to my question was as plain as the nose on my face.  A quick question on the Facebook group "Old School Gamers" revealed that (drumroll, please)...YES!  The Lake Buena Vista Shopping Village toy store did in fact sell Basic D&D (at the very lease).  Behold! 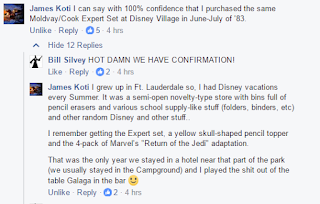 So a big, big hand to James Koti over on Facebook, and to my faulty memories!  If you were a guest at Disney during that time period and have a vague memory of seeing our beloved wizard and his two pawns battling a green dragon, you didn't imagine it!